On any sweltering summer day, practicing yoga provides its own challenges. On an unusually hot Wednesday morning in late July, Gina and I descended into what one can only consider the least likely and most challenging environment to practice yoga—the NYC subway.

Yoga is a challenge. With the gritty NYC subway as the studio, it is even more so. Try balancing on one leg at the edge of a platform or in Tree Pose on a moving subway car. (Talk about wobbly.) I adapted seated poses to the narrow, buckets seats of the subway and the ramps of the stations’ passageways. I even squeezed my Samakonasana (sideways split pose) between two guys without nudging the sleeping one awake. 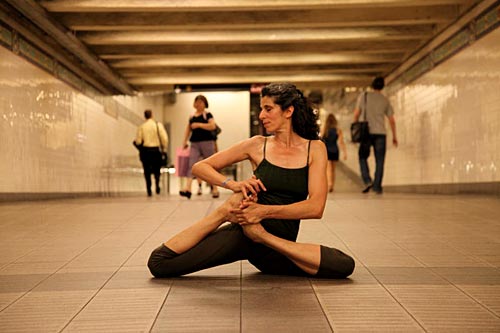 We started our adventure on a stairway at the Grand Army Plaza station. Gina liked the way the light shone down the stairwell. I posed on a small landing and inadvertently blocked most of the stairway, not meaning to stop the people passing by. I thought it would be interesting to juxtapose the passing commuters with the stillness of my poses but no one was game to duck under my extended leg or even come too close. Some clung to the walls and tried to disappear while others, out of a sense of deep respect, simply stopped in their tracks not wanting to interrupt. People were ultra polite and understood the intensity of what we were doing. Our underground practice engendered respect and in a most uncharacteristic New York moment, everyone was waiting for everyone else.

Once inside a moving subway car, I kicked off my flip flops and started practicing, very aware at first how odd I looked. As I continued, I began to feel support building around me. I felt Gina’s intense focus. She seemed to trust me completely. So I breathed back into the poses and kept on. I could feel the other passengers wondering whether I could balance on one foot while the train was rocking. I could also feel the inner words I teach and speak coming from hearts all around me: “Come on. You can do it. Keep your focus.” At one point, a homeless Buddha touched Gina on the shoulder. Another woman cheered for my Hanumanasana.

In search of some NYC views on the Q train that travels over the Manhattan Bridge, we found an adorable, sparkly-shoed little girl with her grandmother on the train. We shared some space with them as I fit my Heron Pose on the seat next to them while Grandma spoke on her cell phone. The simultaneity of the sharp focus of a yoga practice in the midst of the mundane quality of commuting tuned our attention. We were waking people up.

I felt proud wanting to bring the other passengers with me on my yoga journey. I could feel the power of the practice, which sometimes feels so private, as it expanded beyond my limits. Spreading the practice of yoga was Gina’s intention. Touching others was the natural unfolding of this experience. We had given ourselves fully to this raw, exciting, and extraordinary experience. For a few special moments I could taste the vastness of potential for my awareness. 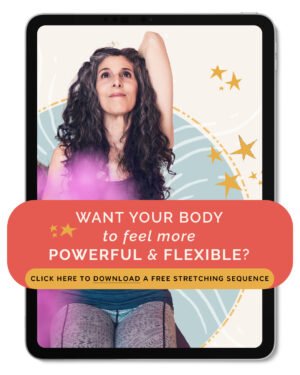